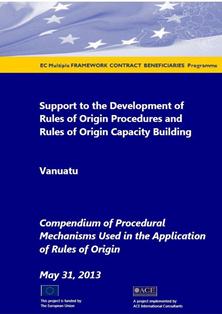 The “wholly produced " criterion applies mainly to "natural " products and to goods made entirely from them, so that goods containing any parts or materials imported or of undetermined origin are generally excluded from its field of application. The "substantial transformation" criterion can be expressed by a number of different methods and mechanisms of application.

Click on the image to view the Rules of Origin Compendium.